One of his earlier episodes has some interesting thoughts on how fear can hold an actor back, and some advice on how to diminish those fears. I thought it was worth sharing. CLICK the LINK below for the podcast.

The information is always valuable, and the price is always FREE. How can you beat that?
Posted by Dan at 10:49 AM 4 comments:

Recently I did some work for RUN Animation Studios here in the Seattle area. RUN did a phenomenal job animating this project for a major northwest/global software company (hint-hint).

It's my first real experience voicing a 3D character, and I couldn't be more pleased with the results; such fluid movements from the artists at RUN!

While I can't show you any of the video, I am able to share a couple of screen-shots. Meet Leonard: an optimistic, magical fellow with a bit of Willy Wonka whimsy in him. That is, if Willy Wonka wore a polo shirt. 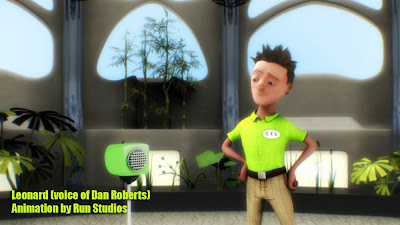 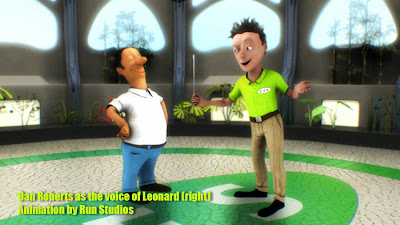 Seattle's NPR station, KUOW, paid tribute to Lucille Bliss today. Bliss was the familiar, scratchy, smiling voice of Smurfette and many other cartoon characters in movies and TV Shows ranging from Cinderella to Invader ZIM. She passed away November 8th.

As it turns out, Bliss was one of the first voice actors to make an impression on me. As a child, I played her Peter Rabbit record over-and-over again. It was released by Walt Disney, and featured this story of Bambi's rabbit pal, Thumper.

Take a listen to Katy Sewall's retrospective of Miss Bliss on KUOW's "Weekday" program with Steve Scher. The discussion begins 38 minutes into the podcast. You can skip to it really fast (I promise), and you'll gain a new appreciation for a talent that survived the decline of old time radio and the ever-changing trends of TV animation.
Posted by Dan at 5:56 PM 1 comment:

Emerald City Comicon 2012 was such a treat for me. I was asked to moderate several voice-actor panels with the top names in the biz. My heroes, essentially. And how nice to learn, after chatting with them, that these folks are as down-to-earth and nice as they are talented.

ECCC has just released a video of one of the panels, featuring Animaniacs/Pinky & the Brain stars Rob Paulsen, Maurice LaMarche, and Jess Harnell sharing their stories, fielding questions from me and their legion of Northwest fans. 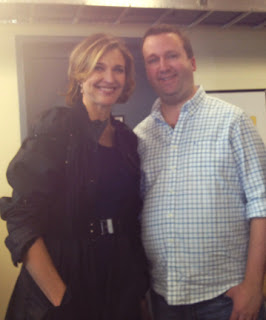 This blurry photograph is, in fact, Desperate Housewives' Brenda Strong and myself. I guess it doesn't really matter if you can see either of us clearly, since we are both better known by our voices.

Below is a great behind-the-scenes video of Brenda at work on DH, which ended it's 8 year run this year.

You can see Brenda acting on-camera all summer in TNT's reboot of Dallas.
Posted by Dan at 5:38 PM No comments:

A quick shout-out to my voice actor friends and long-distance co-workers Ann DeWig and Larry Davis. I had a hand in picking their voices for our station (I fell on the floor and threw a tantrum until I got my way). They sound great! Do you agree?